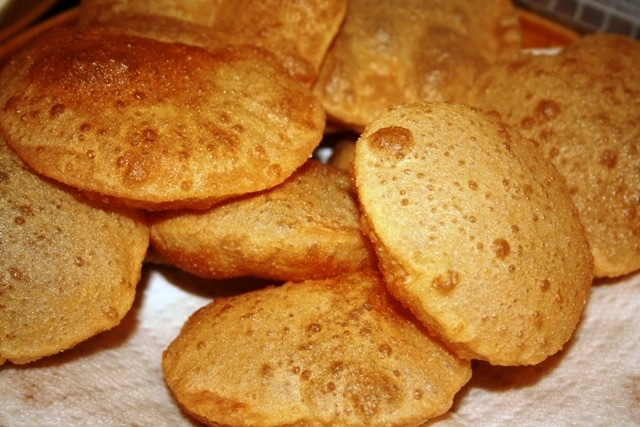 Anything that’s deep fried can never be a bad thing….. Well at least not in my books. Light brown puffed up crisp deep fried puris, just hot off the oil are a thing of beauty. Bengalis serve a delicious Indian bread ‘luchis’ similiar to a puri but the flour base used differs making the texture of the bread slightly different as well.

The other deep fried delights that must be sampled in the Indian repertoire include bhaturas, parathas and kachoris. The list is endless and each of these equally lip smacking. I have eaten most of them and some of my best memories include scoffing little puris for breakfast; using it almost like a spoon to scoop up curries and some side veg. My family cook them during celebrations & auspicious occasions something I know a lot of people do. Cooked in batches and very large quantities; puris are usually smaller in size as compared to chapattis or naans and it’s because they are tiny that they get polished off quicker than you think!

The most commonly known Indian bread in the UK is usually naan made with plain flour. Everyday bread in Indian households is more often than not made with wholemeal flour and for this recipe I have used wholemeal flour as well which is usually available in all Asian stores. You can swap this for plain flour if you like too. You could even add a few tablespoons of milk to the dough which makes for softer dough mix & lighter fluffier puris.